Tim's adventures with a media pc

Visit our page of Useful stuff and see what you could do!

Also in this section

Making a media playout box with a Raspberry Pi 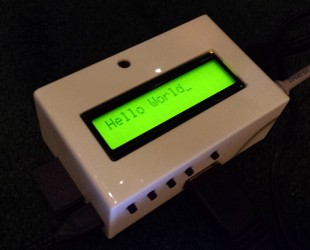 So a new challenge.

For our church broadcast system (see here) we needed a playout box to play video clips out to the internet (service intro sequence and ending, mainly). You can buy these but they are £500 ish.

A raspberry pi is just the ticket for this sort of thing and you can make a nice player for about £40. The video output will use the main HDMI out so a small LCD display is used to show what the unit is doing.

1 Raspberry Pi model B (the original)
1 PiFace Control And Display board
1 Case for the unit. (Only seems to fit the original Pi B so a good job I had one lying around).

Create a card with the Raspbian Lite OS on it (don't need fancy graphical desktop for this) - using Etcher application to create the card.

NB: Use Raspbian Jessie for this not the latest version, which no longer has the libraries for the Piface display.

Run it up and go into

In [Interfacing Options] enable SSL to allow you to login without a keyboard attached. While you are in there you might like to enable the SPI pins so it can talk to the display

While we are in config, we need the pi to login automatically and run the python automatically. In Jessie this is an option Boot options ->Console Autologin.

Then you can login with Putty or something.

Make sure you are using the lastest version of Raspbian:

Install software for the PiFace CAD board...-Install pifacecad (for Python 3 and 2) with the following command: (note those are squiggly brackets)

At this point you should be able to write a little python program to talk to the display...

Press Ctrl-O to save, Ctrl-X to exit.

(if you get a message the display is not found, and you have definitely enabled the SPI, see this link: https://github.com/piface/pifacecad/issues/24

You can also read the buttons using

Hokay, so for the next step we will mount the church NAS drive as a drive on the Pi so that we can access the video files. (see here)

Make a folder that the drive will map to: mkdir sjnserver

Then edit the fstab file to connect the NAS drive. I used the IP address of the drive.

Then mount the drive using

If this works then the pi should remember it on power up, and if you do "cd sjnserver" then "ls" the contents of the server folder should be shown.

Righto, for the next challenge we will play a video from the server using omxplayer, which is the recommended media player on the pi.
First we'll just try to play from the command line to make sure it's all working:
$ omxplayer videofile.mp4
...should play the media file on the hdmi output.

However our end goal is harder than this because we want to control omxplayer from a program, so that the video control software can send "start" and "next track" commands to the player.

For this we will use the omxplayer wrapper by Willprice.

Make a git folder (mkdir git) and cd git, then get it with

then change to the python-omxplayer-wrapper folder and run

Lots of stuff should pass by and the omxplayer wrapper should be installed.

We also need to install dbus

Then we should be able to do this from python

It's nice not to have to edit the python on the pi as the editor is a bit 1960's. So using Notepad++ we can do it on the pc - use the NppFTP plugin (click the cog, go to profile settings to setup a SFTP connection to the pi - type hostname -I.on the pi to get its IP address). You also need to enable SFTP on the pi using raspi-config, Interfacing Options. Then every time you save the code on Notepad++ it is automatically ftp'd up to the pi, nice.

To autorun the script, sudo nano /etc/rc.local and add the lines

before the exit 0 at the end. (add & after the python line to run in background)
The Atem1 is set to 720p / 50Hz. We need the pi to match this or it will not be accepted. The Atem1 does not do EDID properly so we will have to set this manually.
sudo nano /boot/config.txt then edit the lines hdmi_group and hdmi_mode. The possible settings are here. For 720p / 50Hz the hdmi_group is 1 and the hdmi_mode is 19.
Fun with exceptions - if something goes wrong I don't want it to fall out to the console prompt.
If the network drive is not mounted we can detect this:

The player can fail 2 ways - occasionally it doesn't load properly - it plays the file but there is no python control. In this case we get an exception from the player load command, so we need to kill the player and start it again.

The other fail is if it can't play the file, in this case the player load command works ok and we need to send a dummy player.position() read to see if we get an exception

First for this we will need to set a static IP on the pi. To do this, sudo nano /etc/dhcpcd.conf

Then at the bottom add the lines

(the /24 in the ip address sets the netmask)

Then we need to add UDP support to the python program. As follows:

Still to do:change the menu button so it doesn't exit to the command line.

And maybe give an option to play from the local SD card.

Attempt to use 2 instances of omxplayer, so you can be preloading the next clip - and cut or fade to the next clip without black or a pause